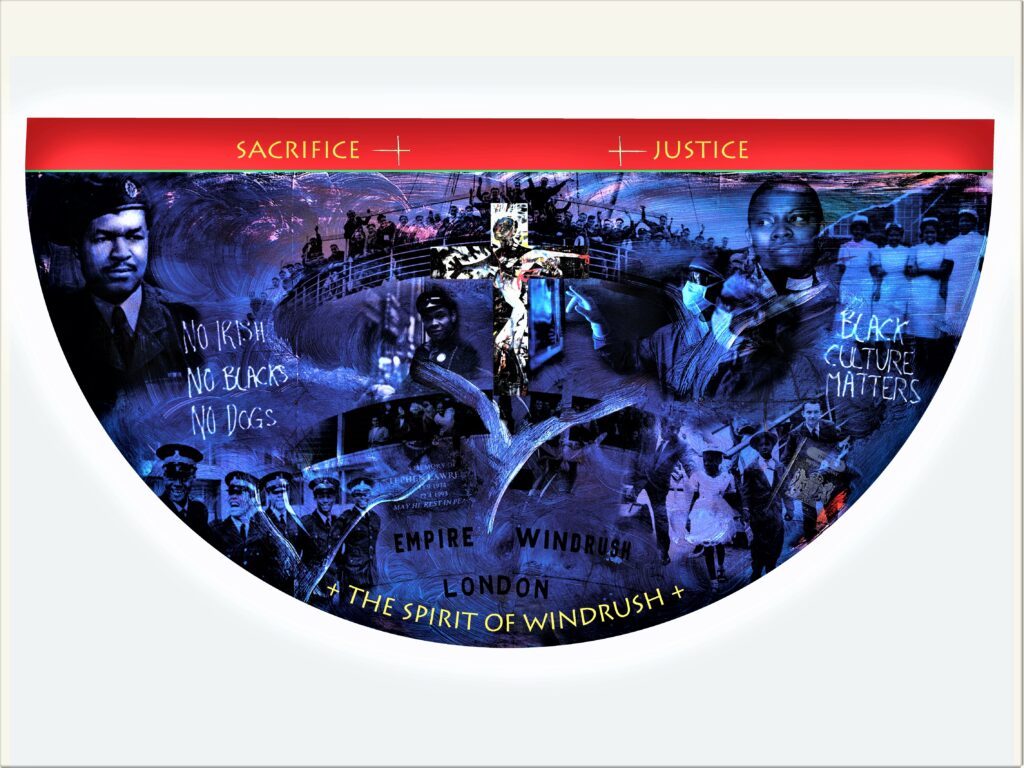 ‘The Windrush Cope’ was created by the artist Terry Duffy to commemorate 70 years since the arrival of the ship Windrush at Tilbury. It is a legacy artwork-vestment that is worn by church leaders and displayed in communities as central to future discussions focused upon the fight for racial equality and recognition of Black cultures outstanding contribution to UK culture.

Aspects of the photo-montage include the tragic murder of Stephen Lawrence; key people such as Sam King MBE, who fought in the RAF during WW2, arrived on the Windrush in 1948, was the first Black Mayor of Southwark and worked tirelessly for racial equality. Also, the Reverend Rose Hudson-Wilkin, born in Jamaica, now Bishop of Dover and a critic of institutional racism in the church.

At the centre of the photo-montage are two Black surgeons pointing towards an x-ray behind the central cross examining what now 70 years later has been achieved in terms of cultural recognition and racial equality for the Windrush generation and Black people generally.

This cope was the third in a series of artwork vestments created by Terry Duffy. Each one is completely unique and develops from an initial large-scale painting by Terry Duffy. Then in collaboration with the photographer Mark Howard it becomes digitally integrated within the complex photomontage you see before you printed on fabric and then painstakingly tailored into a vestment. The shape of the cope was inspired by the wonderful early English copes in the V&A collection and the incredible copes on display in the Macorana Museum in Seville Spain.

At the centre of the artwork is “Victim, no resurrection”, the 14ft high crucifix installed at the entrance of Westminster Abbey. It brings striking attention to the plights of victims who lose all hope of peace and reconciliation.