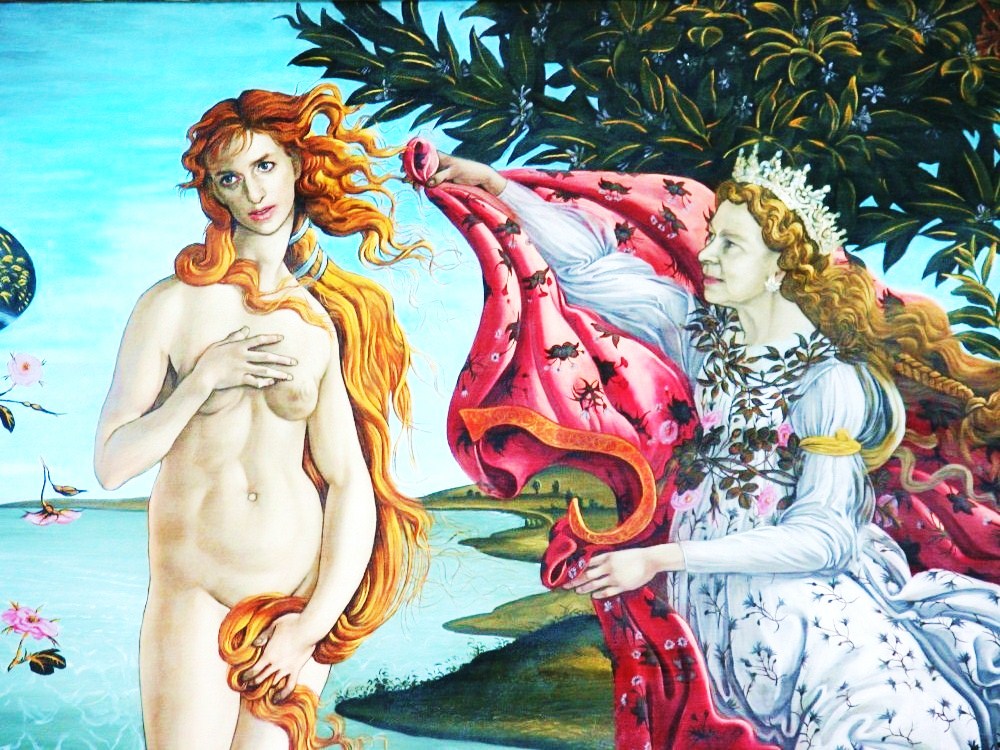 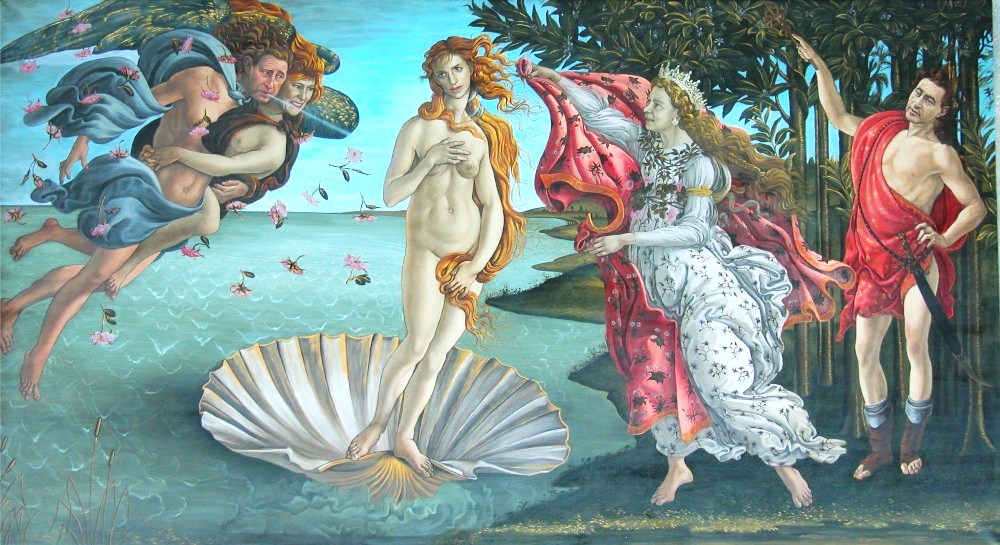 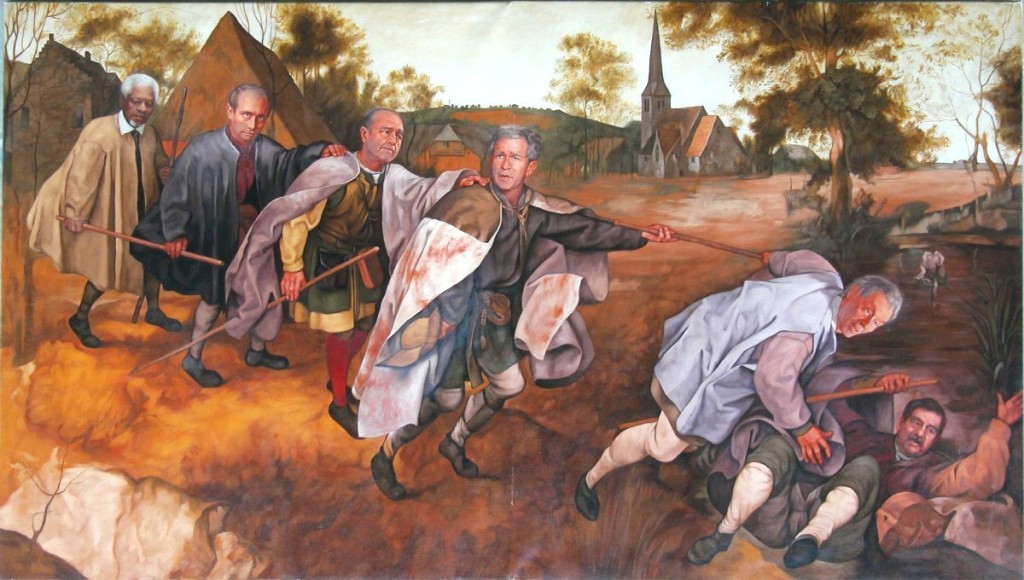 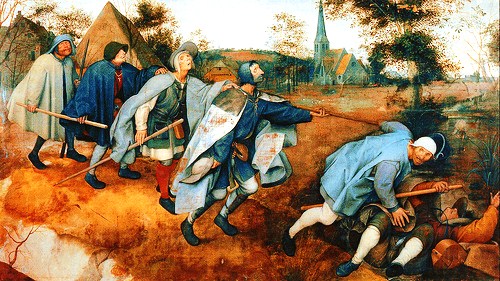 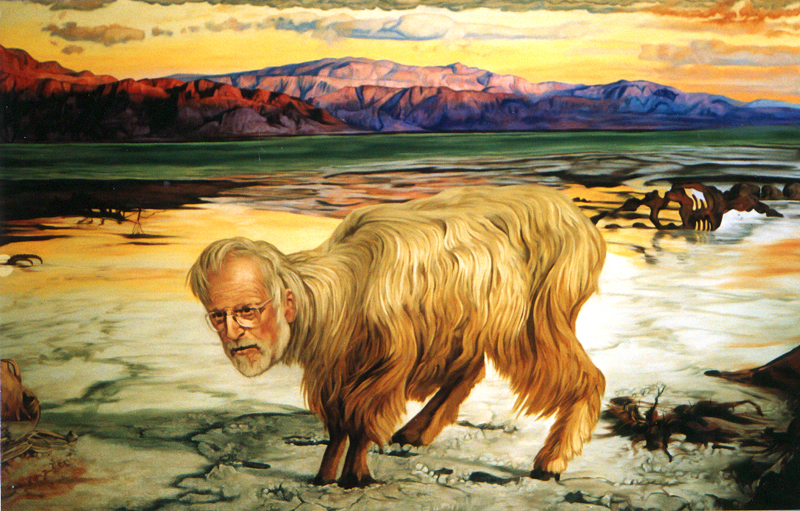 These politically, culturally motivated works are part of a long term focus upon important international issues and subjects. They can be viewed within the same context as the illustrations “Her Revealing Dress” published by Quartet Books in 1985 responding to feminism, the recent “Defacings” inspired by the London riots of 2011 and “Victim, no resurrection” which is a powerful cultural, political statement re war, conflict and extremism.

This painting attempts to express insight into the complex relationships that at the time was a global phenomena. Diana before her shocking, tragic death had gradually, sadly began to bare all, stripping away any vestige of her personal life. She is thus in the painting exposed, stranded and alone. The Queen on the other hand in radiant costume attempts to throw a cloak over her but all too late. Prince Charles, carrying Camilla and ready to fly away, attempts to blow Diana out to sea, the experience being to great to resolve. This complex, thought provoking trilogy is only broken by the figure to the right. The painting has been extended by taking the figure from the far left of Botticelli’s painting ‘La Primavera’ to include Dodi Fahed. The person who few knew little about but who in reality was a crucial part of this complex, politically and culturally sensitive inter-relationships.

Saddam has fallen. Blair carries on regardless, to later fall himself. Bush continues to have that vacant stare, is it “blind faith” or is he the puppet president for Global Companies?. Chirac made pretences for peace with Iraqi contracts in his back pocket. Putin, the only one looking straight at you, isn’t sure of who to follow in this unavoidable power play. Kofi Anan of the United Nations, with eyes closed, trails behind not knowing where the others will lead him? These are the so-called global leaders. Who is blind?  Duffy has reinterpreted Bruegel’s 16th century masterpiece of “The Parable of the Blind leading the Blind” which exposed the folly of un-scrutinised belief. They have found its resonance in today’s political climate and by doing so have successfully questioned our understanding of the current political crisis. They go beyond the war in Iraq and in post 9/11 trauma ask us to re-access who is leading who, for what purpose and to what effect?

Dr David Kelly the leading inspector employed to investigate WMD (Weapons of Mass Destruction) in Iraq committed suicide in what was believed to be very strange circumstances following the intimidating questioning of his findings and professionalism during the Governments Hutton enquiry. He was seen as a scapegoat for Tony Blair cover up of WMD findings by Kelly. He was a tragic scapegoat and later proved that he was right that there was no WMD and therefore, no reason to invade Iraq and the subsequent loss of thousands of lives.

This disturbing paintings revising the Holman Hunt painting of 1854, expresses the extreme plight of a tragic victim of Government manipulation. It is now in 2013 being suggested that Dr Kelly was murdered.

Acknowledgement to the artists Bob Goldborough who assisted in the creation of these artworks.