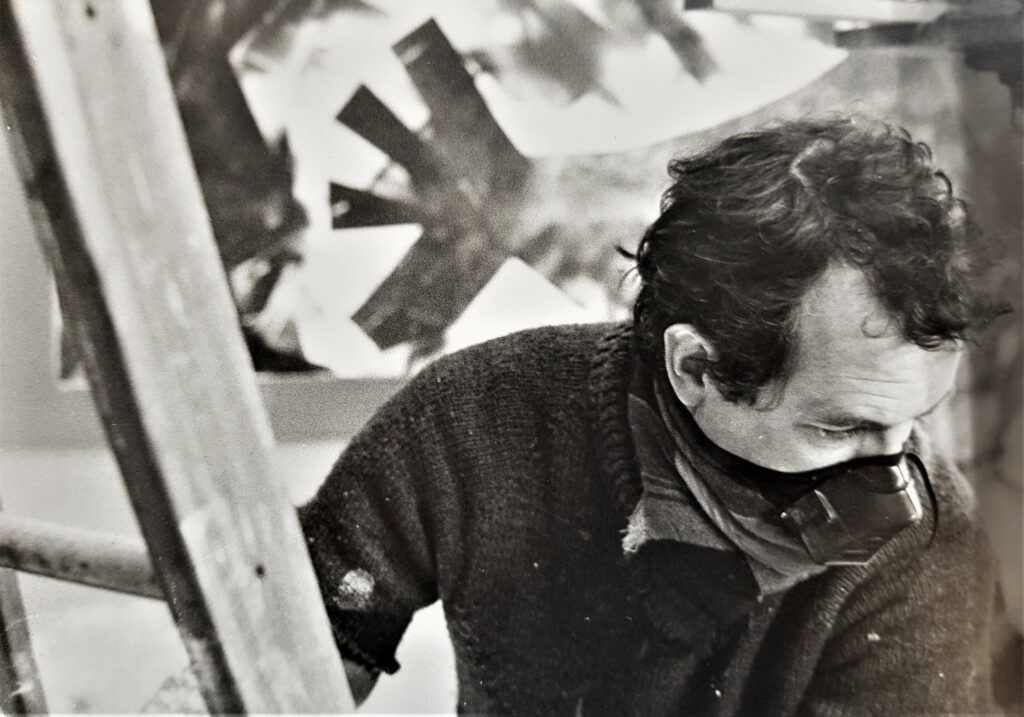 Terry Duffy is an independent international artist with a reputation for unique, challenging work. He has exhibited in London, Paris, Berlin, Cape Town, Dresden, Philadelphia, New York, Liverpool and more.

As is demonstrated by the diversity of artworks on this website Duffy’s creative output can’t be pinned down or categorised.  His interests and skills cover a wide range from sublime minimal abstracts to culturally challenging figurative paintings and large-scale installations. He is an artist in the true sense of the word independent of mind and creative output willing to confront issues of cultural importance. He is fascinated by ART and LIFE.

Duffy was born in Liverpool and at the very early age of 13 won a scholarship for Art School. Following this, he trained as a lithographer and photographer and then for several years worked in print and design studios in London. From 1973 he studied at Liverpool Art College, where he met and assisted various visiting artists including Joseph Beuys, John Cage, Gustav Metzger and more. In 1975 and 76 he was selected for the then-radical New Contemporaries ‘Live Art’ show in London, from there he exhibited at the ICA, Air and Acme London and in West Germany. His work experimented with line, form and space and the then avant-garde issues concerning Live Art within the gallery space. As well as these collaborations with many other artists within his unique concept of Art Games which was promoted internationally through BBC World News.

In 1981 he returned to painting and produced the “Victim Series” which was exhibited nationally and in the USA. This led to major Arts Council awards and international media coverage including C4’s ‘The TUBE’. The ‘90s saw further success and recognition with the British Council ‘Fine Art’ Visiting Fellowship in Budapest Hungary and inclusion in major shows including The John Moores and the Hunting/Observer Prize. Since the 90’s the work has progressed consistently with shows nationally and internationally including Paris, Berlin, New York, Dresden and Cape Town.

In 2008 his MONUMENTS installation of abstracts integrated within a vast monolithic installation was included within Liverpool Biennial, sponsored by Barclays Bank. The location and installation were chosen for the opening launch of that year’s National Museum Council Directors Conference. In the same year, Duffy exhibited at the Walker Art Gallery Liverpool. In 2009 MONUMENTS was included in the internationally prestigious Venice Biennale ‘Collateral’ programme with the vast installation being housed within the Palazzo Contarini, sponsored by Sotheby’s Realty. Following this installed at the Brunswick Centre and launched that year Bloomsbury Arts Festival London was opened by the Duchess of Bedford.

Other important works such as ‘Victim, no resurrection’ (VNR), a 4.2-metre-high crucifix painting has been exhibited internationally including Liverpool, New York, Dresden, London, Cape Town, etc. This has progressed further and in 2020 a black ‘Body Bag’ was created for the painting. The aim is that VNR will be carried within a procession bringing attention to those who have died as victims. Other locations for VNR are being considered worldwide.

Since 2016 because of his ‘Cope’ paintings, Duffy has received several commissions to create unique religious vestments for Coventry and Dresden reconciliation; Archbishop Desmond Tutu; the WW1 Centenary Commemorations; the politically sensitive “Windrush” commemorations. Another recent commission, yet to be completed, from Liverpool and Warwick Universities, is to create a symbolic robe for the judges at the International Criminal Courts, The Hague that questions and challenges their work.

In 2018 Duffy began to work on a project that became entitled ‘The Vardre – Y Faerdre’. Initially focussed upon ‘The Vardre’, a small hill above his house in North Wales. It developed into a unique installation of 29 paintings within a sound installation. It is focused upon the English colonialization of Wales, in contrast to Welsh National identity through the Welsh alphabet and language. It is yet to be exhibited.

During Covid in 2020/1, Duffy wrote ‘The Vessel’. His story as an artist, his travels, experiences. It is a deep insight into the creative mind and vision of an artist not satisfied with art for art sake but art that can change minds, challenge social, political norms, reconsider the human condition. As he wrote in ‘The Vessel’, “Art attempts to open minds and heal wounds.”

Finally, to be completely up to date Duffy has begun working on a project focussed upon Hilbre Island. An island that he can see from his studio on the beach. The ambition is to establish this wild island in the Dee estuary as a base for artists, designers, and scientists to investigate sustainability, ecology and the possibility of being self-sustained through the use of the natural resources of wind, sun, tide and more. He has now involved Liverpool John Moores University, The British Art and Design Association, The Friends of Hilbre in this endeavour.